The Vedas (meaning knowledge) is an ancient collection of poetic texts thought to have been revealed to ṛṣis (seers) by God or the ‘ultimate highest form’ the teachings referred to as śruti meaning “that which is heard”. The Vedas, comprising of Ṛg Veda, Sāma Veda, Yajur Veda and Atharva Veda also referred to as the four pillars of thought. Often we chant from the Principle Upaniṣads (in particular the Taittirīya) these texts also written over centuries are considered to be Vedic revelation or the culmination of Vedic hymnodies. The Vedas are regarded as an authoritative source of ancient Indian wisdom and knowledge. Age old teachings that can still have tremendous relevance in today’s challenging world.

Originally transmitted orally with strict chanting rules, it is thanks to these rules that these texts can be brought to life and experienced today exactly how they were shared thousands of years ago. One can find this a truly magical experience.

This is not to say that Sanskrit chanting in kirtan with harmonious music is less meaningful or authentic, it is simply that the Vedic tradition has been the precise means (and for thousands of years the only means) of preserving and passing on the teachings of yoga since their realisation many millennia ago, and as such require the precision and preservation for future generations as well as our own present experience and benefit.

It is worth noting that from the Veda’s come mantras, words of power, the effects recognised on different levels by many of us, in-particular yoga practitioners. There is a real depth to this science that invites mindfulness and respect as we recognise that mantra at its highest level is certainly not the simple recitation of a few words.

I’ve been surrounded by yoga my whole life. I trained with the Yoga Academy in 2016. A series of events led me to focus on Vedic Chanting which now and for the foreseeable future has become a significant part of my life and yoga studies.

I am privileged to have the tutelage of two Vedic chant teachers. Gill Lloyd (student of TKV Desikachar) who I have studied with for many years and since early 2020 with Shobana Srinivasan who is head of Vedic chanting at the KYM (Krishnamacharya Yoga Mandiram, Chennai India). My chant practice is in the tradition of T. Krishnamacharya, Yajur Veda lineage.

I’m honoured to be able to share a sample of this with HomeYoga. 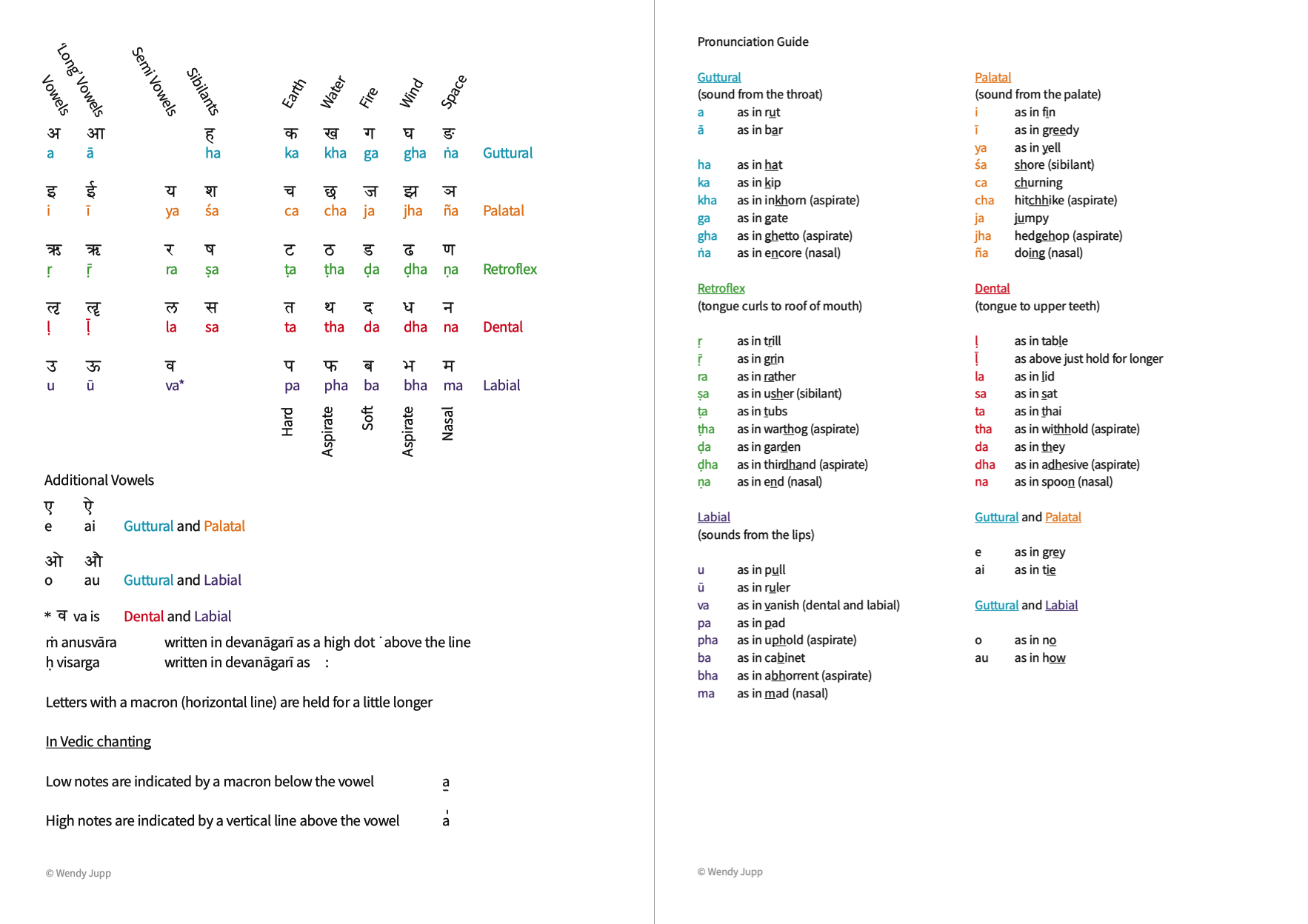 The ḥ usually takes the sound of the vowel that precedes it particularly when the chant is not being linked or if it is at the end.

Note: Further rules will be introduced should the chant practice require it.

A note on Sanskrit

We are using the International Alphabet of Sanskrit Transliteration (IAST) this way there can be no ambiguity over correct pronunciation.

A vertical line above a vowel ‘ā’ is held for two beats (similar in English to how we hold for longer on words with double adjacent letters like ‘good’, ‘food’ ‘seen’ etc)

A ślokaḥ often recited at the end of chant sessions, to Lord Nārāyana who we ask for forgiveness for any mistakes that we may have made, with our apologies we note that we are trying.

A chant often recited at the beginning of studies or practices.

A salutation to the sun. We look to the sun for courage, strength and clarity, may the light shine through darkness and ignorance.

From the Bṛhadāraṇyaka-upaniṣat – known as ‘The Great Saying’ Wonderful chant to start learning off by heart. Lead me from the unreal to the real (or ignorance to perception) Lead me from darkness to light Lead me from transience to eternity (fear to confidence or suffering to no suffering)

Invocatory chant. Traditionally performed before our chant practice in honour of our teachers Śri Kṛṣṇamamacharya (who opened this practice to all with good intentions), and Śri TKV Desikachar (Sir).

This prayer/mantraḥ is also referred to as the mangala mantraḥ.

This beautiful chant simply states that the infinite comes from the infinite, in terms of our universe and of our human essence.

An invocation to the divine requesting health, nourishment and well-being of mind and body. It asks also that we be steadfast and have clarity of thought.

A beautiful chant asking for peace everywhere in all forms of being, in the universe and the vast ethereal space beyond.

A chant of optimism, the sun giving us light and hope that we may see and love a hundred years.

A salutation to the moon, honouring the moon as the King of medicinal herbs. Moonlight is incredibly calming. This chant can be particularly helpful when we suffer anxiety.

A version of the gāyatri including the seven vyahrti’s (utterances, mystical words or sounds) also known as seven worlds, seven planetary systems, seven elementary forces and some liken to seven great sages.

Gaṇapati the wise head of the army of demi-gods (also known as Gaṇeśa). Chanted to request that our ventures or undertakings may be successful, smooth sailing and without hindrance or obstacles

The title meaning a great victory. This is described as an incredibly powerful chant, to bestow immortality.

In honour of Lord Śiva a sacred mantraḥ for those who see Śiva as the ultimate supreme being. This recording offers Samhitā, Krama, jaṭā and ghana – pāṭhaḥs which can assist learning the different modes of Vedic chanting

We dedicate all our actions, all that we do and all that we are, all of our being our mind body and senses we dedicate to a higher purpose, to the Lord Nārāyana.

In honour of Gaṇeśa, this chant describes his curved trunk and large body, his magnificence is akin to a million suns! Further we request our endeavours are free of obstacles, we ask for Gaṇeśa’s blessings in all that we do.

We use cookies on our website to give you the most relevant experience by remembering your preferences and repeat visits. By clicking “Accept All”, you consent to the use of ALL the cookies. However, you may visit "Cookie Settings" to provide a controlled consent.
Cookie SettingsAccept All
Manage consent

This website uses cookies to improve your experience while you navigate through the website. Out of these, the cookies that are categorized as necessary are stored on your browser as they are essential for the working of basic functionalities of the website. We also use third-party cookies that help us analyze and understand how you use this website. These cookies will be stored in your browser only with your consent. You also have the option to opt-out of these cookies. But opting out of some of these cookies may affect your browsing experience.
Necessary Always Enabled
Necessary cookies are absolutely essential for the website to function properly. These cookies ensure basic functionalities and security features of the website, anonymously.
Functional
Functional cookies help to perform certain functionalities like sharing the content of the website on social media platforms, collect feedbacks, and other third-party features.
Performance
Performance cookies are used to understand and analyze the key performance indexes of the website which helps in delivering a better user experience for the visitors.
Analytics
Analytical cookies are used to understand how visitors interact with the website. These cookies help provide information on metrics the number of visitors, bounce rate, traffic source, etc.
Advertisement
Advertisement cookies are used to provide visitors with relevant ads and marketing campaigns. These cookies track visitors across websites and collect information to provide customized ads.
Others
Other uncategorized cookies are those that are being analyzed and have not been classified into a category as yet.
SAVE & ACCEPT